Political theology is a fundamental theology, that is, a theology that looks to what lies beneath, to the parameters and methods for thinking about religion. It addresses the questions that constitute and justify a theological calculus, but he also insists that Christian theology must have a deep structure that is both mystical and political: it must connect with both our religious experience and concrete social settings. “The new political theology is the attempt to talk about the times, more precisely, to discuss the prevailing historical, social, cultural situation so that the memory of God found the biblical traditions might have a future” (LS 167).

The History of the New Political Theology

In a sense, the new political theology began with the experience of a teenage German soldier at the end of World War II. Young Johannes Baptist Metz was sent from the front lines back to the rear with a message for the commanders. When he returned his entire company, every comrade–boys and men–was dead, killed in an American bombing raid. Baptist recalls wondering alone for three days with a silent cry.

When he did return home from war, he asked his family about the concentration camps and the Jews, but they did not know what he was talking about. What was he to make of this loss and that silence? These two experiences of suffering became dangerous memories for Prof. Johann Baptist Metz.

Metz began to formulate his “new political theology” in the years after Vatican II. He was a student of the famous Catholic theologian Karl Rahner, S.J. and edited Rahner’s major works Hearers of Word and Spirit in the World for publication. But he felt something missing in Rahner’s transcendental method. Where was any concrete historical behavior? Where was the attention to the history of human suffering in the world? Most especially, where was the attention of German theology to the Holocaust?

“Theology expresses itself not only in singing, but also in crying out.”

As a corrective, he began to develop new theological categories and themes.  Some of his key ideas were developed from notions of the philosophical movement known as Critical Theory (Theodor Adorno, Walter Benjamin). Metz himself kept in close contact with Jürgen Habermas. All of which is to say that the political theology of Metz looks more to the social and historical than to the metaphysical roots of inquiry. Who is asking the questions? Who is invisible? Who is hurt?

We live in times of radical pluralism and globalization—and of forgetfulness. A cultural amnesia lets us lose track of the human person in the practice of science, technology, economics, communications, politics—and even in terrible suffering. Theologians need to face the world, to remember the suffering of others, to hear their cries and respond by shaping a concrete praxis that pulls us toward the future that God has promised. The memory that Metz calls for includes not only critical grief and active compassion but also a hope that connects us all. 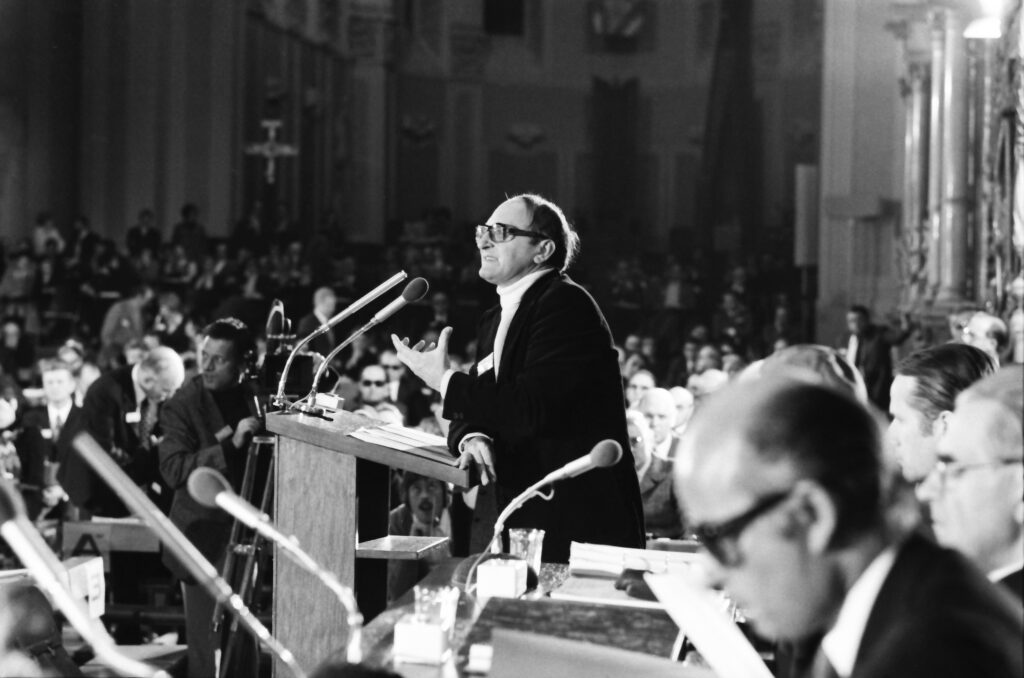 Attempts to develop the notion of the political and of praxis continue. Recent papers look to Hannah Arendt, Walter Benjamin, Jacques Derrida, Edmund Husserl, and Cornel West for philosophical grounding. The categories and questions of political theology can be useful in many contexts: they provide a framework for thinking, not an answer.

In 2012 an international seminar of younger political theologians began meeting in Hannover, Germany. Their goal is to support the development of the new political theology of Johann Baptist Metz by sharing research and projects. Professor Metz addressed the group at its first two meetings.